Devold brought back with him state-of-the-art mechanical knitting equipment and high hopes of selling his products – knitted woollen underwear and mittens – to the fishermen and those wearing the rødlua, a red knit cap not unlike a beanie – a festive garment used on Sundays, deeply rooted in Norwegian folklore, that has become a symbol of adventure and exploration. However, gaining ground among the local merchants was easier said than done. For this reason, Devold travelled to Bergen where he sold his goods through Sundt, a well-established wholesaler, who in turn sold Devold’s woollens to the local merchants in Ålesund.

It didn’t take long for Devold to establish a reputation as a quality brand. Fifteen years later, Ole Andreas Devold’s sales were in full swing and, a few decades later, the German-educated Norwegian from the West Coast became the owner of one of the largest textile factories in Norway.

Ole Andreas Devold understood early on that a combination of quality and innovation was key for any successful company. That’s why innovation has been the main thread in the wool company Devold’s success story. In 1882, the knitting industry pioneer built Norway’s first electric power station next to the Devold factory. One of the key factors in wool production was access to water. Not only to facilitate electricity generation, but also for washing and dyeing wool. Devold created a dam of his own with a water wheel, establishing what was probably the first mechanically driven knitting factory in Norway. Once the water wheel was put in place, it only took a year before Devold reached the next historic milestone. Just four years after Thomas Edison invented the modern light bulb, Devold installed electric lighting in his weaving mill. The 125 light bulbs were the first electric illumination in Sunnmøre and could be seen from the surrounding mountains.

But Devold did not stop there. He also was one of the first people in Norway to start using the telephone. He did so when the company moved production from Ålesund to Langevåt. But, initially, Ole Andreas could not find a telephone station in the area. In 1892, a 3–4-km-long telephone line was suspended across Borgunfjord, from the factory in Langevåg to the office in Ålesund. This spared the employees many a boat trip across the fjord and the factory’s efficiency increased significantly. 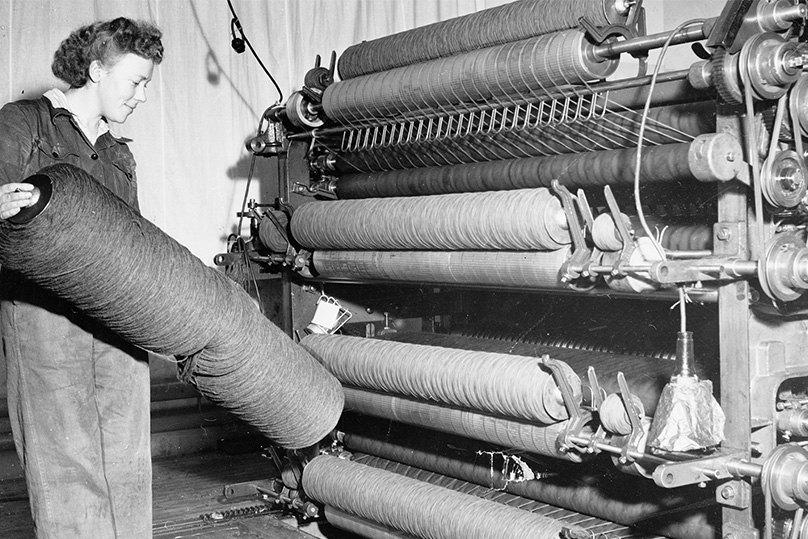 The successful establishment of the Devold factory in Langevåg helped to preserve the fabric of the community in that the people who would have emigrated to America during the latter half of the 19th century opted to stay instead. Ole Andreas Devold not only created jobs, he was also a follower of Hans Nielsen Hauge, a Lutheran lay minister, spiritual leader, business entrepreneur, and social reformer considered to have been influential in the early industrialisation of Norway. So, Devold took on many social responsibilities. Devold established hospitals, churches, kindergartens, and grocers’ shops, and built 20 decent houses for his employees. From a population that could be counted on the fingers of one hand a small community was now emerging at the foot of the Sulafjellet mountain in Langevåg. The farmers elsewhere in the Sunnmøre region were also involved. They started delivering their wool to Devold’s shop on Kongens gate in Ålesund with an immense sense of pleasure. Doing so was more profitable than processing wool on their own, and so the farmers exchanged wool for finished clothes rather than the jingle of coins.

Langevåg was a place of bustling activity during the 20th century. The factory was expanded and Devold made major investments. Boats came and went with loads of wool. In the early 20th century, exports were already an important source of income for Devold. A steamboat named “Torolf”, purchased in Hardanger, sailed along the entire coast – “from the Swedish to the Russian border” – to meet demand for Devold clothing. The original blaatrøia (blue jumper) was extremely popular abroad and was exported to the Faeroe Islands, Iceland, and South Africa, among other places. The rødlua, a party garment also used for Sunday celebrations, was also an important product, as was the coarse labourer jumper Islenderen (Icelander).